Horror? I Don't Even Know Her!

Around this time of year, every year, I go a little mad with all things Halloweeny on the brain. Granted, I haven't been to a good Halloween party since my dearly missed former roommates and I stopped throwing them (*ahem! Pats self on back. And on butt a little too.*), but once October hits (okay, early September) I'm craving Halloweeny movies, scouring Google Image Search for costumes, even consulting Martha Stewart for ghoulish goodies I'll never make. And I become alarmingly angry when I see premature Christmas paraphernalia threatening to infringe upon my most beloved of holidays.

This year, thanks to many of my favorite people fleeing the country in recent years, our crew has whittled down to too few to throw a decent house party and I'd rather avoid the same old bar/club my friends frequent with disturbing consistency. So I was thinking maybe just a movie night, or, as a brilliant colleague just suggested to me, a rousing (inebriated) game of Zombies!!! (I adore zombies for some inexplicable reason and I had never heard of this game until this morning). She also recommended an early 80s Canadian horror flick called The Pit, which looks incredibly brilliant. (I have a huge soft spot for good bad movies, and have a lot of catching up to do since I only really summoned the courage to start watching horror films in my 20s. Yes, I am a huge wuss). 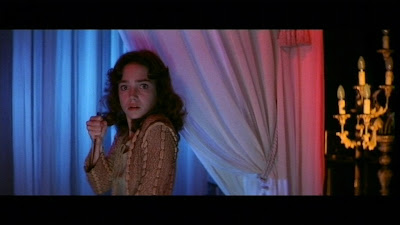 The images above are all from my current inspiration obsession, Dario Argento's 1977 film Suspiria, which I only discovered last year (I told you I was behind). Have you seen this film? It's insanely stylish and the score by Goblin is simply the creepiest, most perfect spooky music ever. Obsessed, I tell you!
Do you love Halloween too? Got any more must-sees for me? Bring it on! :-)